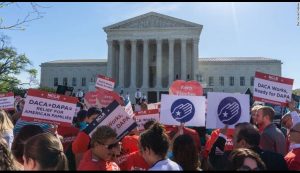 Is the Supreme Court above Politics?

Yesterday the U.S. Supreme Court heard oral arguments in a case that many believe could determine the fate of President Obama’s legacy on immigration.

The case, United States v. Texas, No. 15-674, relates to a program intended to allow more than four million unauthorized immigrants, parents of citizens or of lawful permanent residents to apply for a program sparing them from deportation and providing them work permits.   This program, was announced in November 2014, and is called Deferred Action for Parents of Americans and Lawful Permanent Residents, or DAPA.

The case was brought to the Supreme Court by Texas and 25 other states, and could produce a remarkable ruling on presidential power and immigration policy.

According to the New York Times –  http://www.nytimes.com/topic/organization/us-supreme-court – The Supreme Court yesterday seemed sharply divided over a challenge to President Obama’s plan that would shield millions of undocumented immigrants from deportation and allow them to work in the country legally.

Several Supreme Court Judges asked questions or made remarks.   Justice Kennedy said “It’s as if the president is defining the policy and the Congress is executing it. That’s just upside down.”

Justice Roberts added: “I mean, they’re lawfully present, and yet, they’re present in violation of the law?”
Several groups of people outside the Supreme Court,  demonstrated walking up and down the sidewalk, holding banners and chanting mantras like “Sí se puede,” Spanish for “Yes we can.” 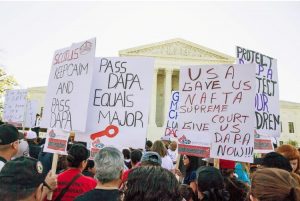 I am an optimistic person.    I will wait with confidence the Supreme Court decision on yesterday’s  case.

What do you think?    Would like to hear from you.

« Shocking Socialism unseen chains !
And – The Winner is? The book goes to? YOU ! »