How desperate are we for God to save us and America? 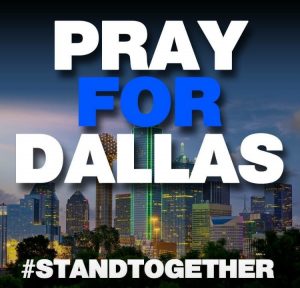 How desperate are we for God to save us and America?

We all agree today that America is a mess for many reasons.

One reason is that we have been rejecting God. Others believe that we as a nation are coming under the judgment of God.
Nevertheless, we still try to find solutions to our deeper problems without God. But in his wisdom and love God allows us to do our way removing His blessing, protection, and favor from us.
After almost 28 year, www.virginiaprodanbooks.com, I am heartbroken to see America changing so much and turning its back to God.
I strongly believe that: “There is no freedom without God. Not even in America.” Virginia Prodan

In Dallas, TX were I reside, last night we just experienced the deadliest day for police officers since September 11, 2001.

At 7:00 last night, protesters gathered in a Dallas park and began marching through the streets of downtown. This protest was a response to officer-involved shootings in Louisiana and Minnesota. The rally was peaceful as the police officers were present and many of them were conversing with the crowd.

But just before 9 PM, as Dallas Mayor Mike Rawlings said, “Our worst nightmare happened.” Shots rang out. Ten police officers were shot, along with one bystander. An eleventh officer was later shot during an exchange of gunfire with a suspect. Five of the officers died. Some of the six who were wounded are undergoing surgery.”

According to Police Chief David Brown, four people coordinated the attack with rifles, positioning themselves in triangulated locations near the end of the route protesters planned to take. The snipers fired “ambush-style” from an “elevated position.” That some of the officers were shot in the back.

According to the retired FBI special agent Steve Moore “This was an attack planned long before—waiting for an opportunity to go,” according to Moore. “They may not have planned the location, they may not have planned the vantage point. But they had prepared for an attack before last night’s shooting is my guess.” see here : http://www.cnn.com/2016/07/08/us/philando-castile-alton-sterling-protests/index.html?sr=twCNN070816philando-castile-alton-sterling-protests1010AMVODtopLink&linkId=26334185

Finally authorities announced, at 3:06 AM, that a suspect had died after a standoff with police in a garage at El Centro college; that three people are now in custody. and that K-9 units are sweeping the area for possible bombs; large sections of downtown remain closed this morning.

It is time for us Americans to realize that the solution to our problems will not be found in politics, a better economy or strong military or even an advanced technology or even a President.

Is time to agree that the real solution is found on our knees in God. We cannot let the evil prevail in America.

Frequently people ask me: “What will determine the outcome? Who will decide America’s future? Can I actually have an impact now or is too late ?

The Bible is clear about the power of a prayer and repentance.  We must repent individually and as a nation crying our collective cries for mercy to God.
By our repentance, we can tip the scales and bring the rain of revival, restoration and recovery from God to come pouring forth.  It is time in America for Christians to soak our prayers and soak our land with tears for America. God wants to work in us and through us. God in us can determine the outcome of America!
The question is How Desperate Are We for God to heal us and America?

Today at noon you all are invited to pray for our city Dallas at Thanksgiving Square or anywhere else. There also many other praying churches events in Dallas. You can also pray for Dallas, TX in unity with US at noon time today, wherever you might be!

Hope you join us in prayers !